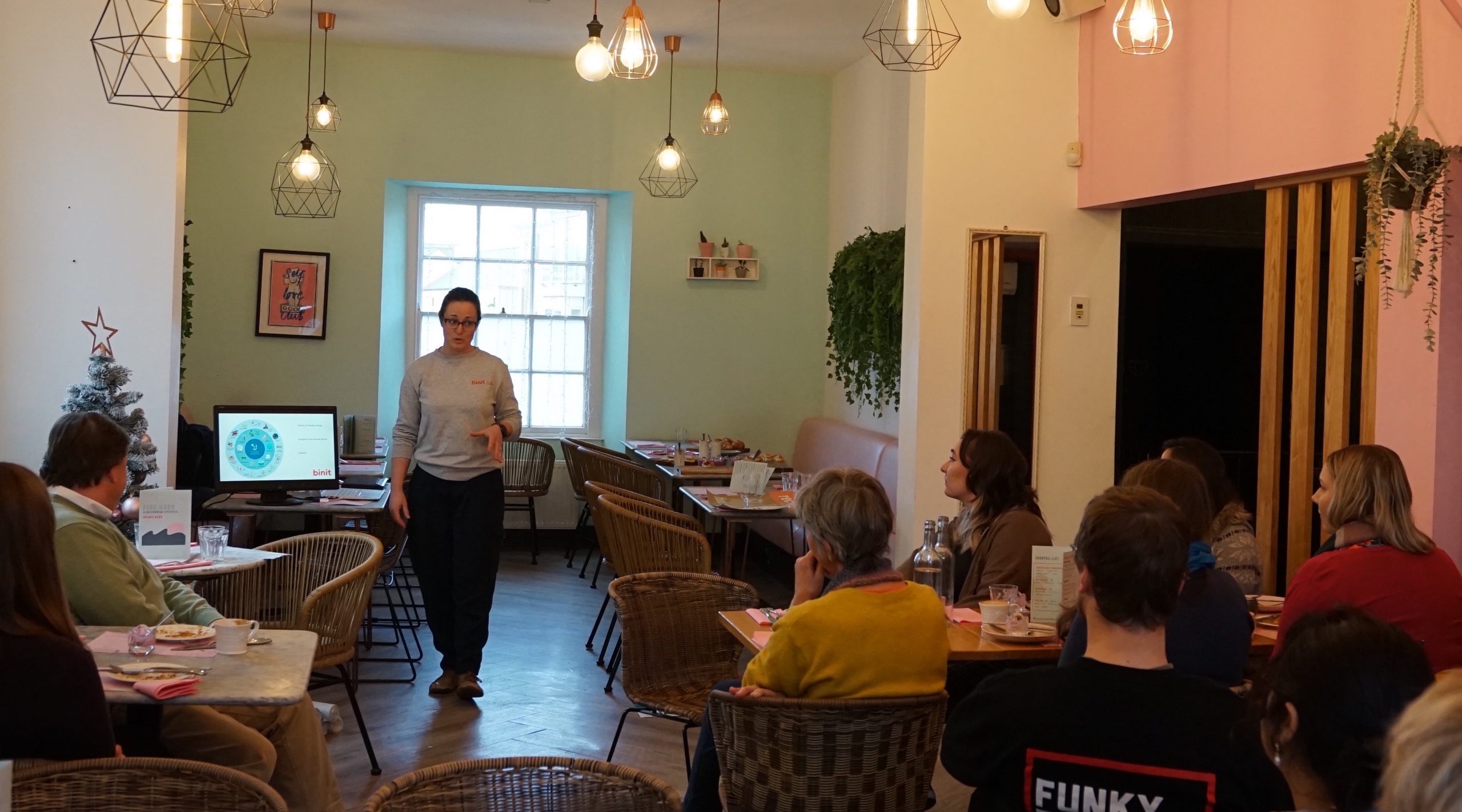 Philippa Robers giving a talk on the U.K’s new environment bill and COP26

At Binit, we go beyond the bin. Sometimes that means treating our customers to free breakfast (Trust me, it’s not a bribe!) in an effort to inspire and educate. At this breakfast event, we talked about COP26 and the U.K’s new environment bill.

Our customers learned a fair bit about the intricacies of COP26. Philippa spoke extensively around the U.K’s environment bill, and of course, many croissants were eaten. How then, did we influence our customers from a one-hour breakfast and talk? Well, let’s first tell you what we told them:

The Climate Change Conference of Parties (or COP) is an event bringing together heads of state, climate experts, campaigners, scientists and many other influential people to bring about real change in the global economy. But you already knew that (well, maybe not what COP stands for but, still.)

What you might not know, is that even if all the promises made were met within the set timeframe, we’re still not on track to keep warming below 1.5 degrees. What’s worse, many of the promises made were based on the development of technology that doesn’t even exist yet! That includes carbon capture technology. Other targets set have no requirement to begin actioning change until man-years down the line. For example, One of Brazil’s environment ministers said: “There’s a very good reason Bolsonaro felt comfortable signing on to this new deal. It allows another decade of forest destruction and isn’t binding.” The Amazon makes up half the worlds rainforest, and 60% of it is in Brazil.

Things aren’t better closer to home, as the U.K’s biodiversity has decreased by 50%. That’s the worst in Europe! But before you accuse us of giving a talk that might as well be a eulogy to ourselves, we did in fact share some redeeming news.

Over 100 countries agreed to cut methane emissions by 30% before 2030. Methane has 80X the warming power of C02. It’s a brilliant way to get ahead of the curve in the fight against time. However, Carbon Dioxide lasts longer in the atmosphere. This means methane is a quick fix, not the solution.

In the spirit of positivity, it’s also humbling to know that an overwhelming number of businesses, trade groups and financial institutions made significant climate pledges too. This includes sectors where cutting emissions is particularly difficult, like the concrete industry. The Global Concrete and Cement Association committed to cut their emissions by a quarter this decade and reach net zero by 2050.

Further, following commitments from Nestlé, Tesco committed to a market-leading 1.5C aligned science-based target ahead of COP26 that covers its whole supply chain. And on top of all this, 60% of FTSE 100 businesses have adopted net zero emissions targets as part of the United Nations’ Race to Zero initiative.

So, that’s it then. Job done! Not just yet my friend…

As mentioned earlier, there is still a long way to go in the development of technology that will help reduce our carbon footprint. Carbon Capture and storage projects do exist, but they’re a long way from being commercial and scalable. The worlds largest carbon capture plant can remove up to 4,000 tons of C02 per year. Only 36,699,996,000 tons to go!

Further, Hydrogen (Fuel cells and cars) are still in the early days of development when compared to electric vehicles. And electric vehicles still only make up a fraction of the worlds total cars. Then there’s the worry of runaway climate change. Remember how methane is 80X more potent than C02? Well if we continue on our current trajectory then eventually, significant amounts of wetland and permafrost will release unprecedented amounts of sequestered methane back into the atmosphere, massively reversing any progress. The same will also happen to re-planted forests which sequester carbon if wildfires continue to become more common.

Some inspiration for our customers

Now you’re a little more up to speed on our talk, you might be wondering how this inspired change in our customers. Well, one customer: Eat the bird, who already champion vegan take-out in Exeter, are going even further with their waste. Taking drastic action now, like cutting methane, means significant behaviour changes, such as reducing meat intake. Agriculture is directly responsible for up to 8.5% of all greenhouse gasses. Therefore, increasing the availability of delicious vegan options on your menu has a massive impact.

But they haven’t stopped there. After our talk, Eat the bird got in touch to say they’re looking for new ways to recycle their ice cream cartons (they also make a banging milkshake). If that isn’t enough, they are also considering waste reduction in their supply chain as they open new stores!

Though Eat the Bird are just starting their journey, it is exciting to know we succeeded in inspiring change. We’ll keep you updated on the progress at Eat the bird. For now though, we hope this inspired a bit of change in you too.